Why You Need a MicroSD for your Dash Cam

Ever try inserting a vinyl record into your blu-ray player? Doesn’t work so great, does it. The same applies to SD cards because there are different formats, and only one works in Dash Cams: the microSD card. These thumbnail-sized cards are only 15mm x 11mm, but don’t let the compact size fool you. They’re actually the miniature super-powered hero in your Dash Cam, helping defend against false insurance claims and theft. So, it’s crucial you arm yourself with the best microSD card you can find. Conversely, standard SD cards are noticeably larger and often used in digital video cameras and A/V equipment, so make sure you’re looking at the correct format when purchasing an SD card. Smaller is better here.

Equally important is that the majority of SD cards on the market are not even approved for use in Dash Cams. Consider that almost all microSD cards are produced for general usage in the consumer market and are not tuned to operate expressly in Dash Cams. With a non-compatible memory card, you can expect your Dash Cam to freeze at the most inopportune time during an accident or even corrupt your files during playback. This will make the card all but useless. Not to mention that many manufacturers and retailers will often void your warranty if you insert an incompatible card in your Dash Cam.

But with Nextbase microSD cards, you get a full one-year warranty and assurance that your memory card is configured to be fully compatible with your Dash Cam for superior performance and durability. And there are a wide range of Nextbase SD card storage sizes that are easily available at most retailers. Seems like a no-brainer here if you’re already buying a Nextbase Dash Cam.

So choosing a memory card that is both the correct size and compatible with Dash Cams is crucial in allowing it to perform at the optimum level designed by the manufacturer.

That’s easy enough to remember. With these two essential requirements in mind, you’re off to a good start.

Some people ask, “How important is a microSD card, anyway?” Well, imagine your computer or iPad with no memory; it would become a rather funny-looking paperweight and not much else. A microSD card is simply a memory storage chip that fits in your Dash Cam and allows the device to record, store, and playback historical footage when you need to access it. Without a robust and compatible microSD card capable of retaining large amounts of data, vital evidence of an accident would soon be lost or not captured at all, the essential footage overwritten before you have a chance to retrieve it. Lower capacity cards can also cause certain features to be inaccessible or even fail to overwrite and record new video. So, of course, you want one, and the more advanced, the better. After all, what good is purchasing a crappy microSD card if it can’t playback anything?

So, what is this U1, U2, or U3 that you may see associated with microSD cards? And isn’t U2 that rock band? Actually, these signify the ultra high speed (UHS) class designation and refer to their minimum sustained write performance. Although U1 and U2 can be used in some Dash Cam models, the U3 has superseded them in the higher-end models, making it the best choice for your Nextbase camera.

But to understand why this is important to you, the Dash Cam owner, we have to talk about Write Speed. No, this isn’t how fast you can spell your name. Write speed is how much data (minimum sustained megabytes) the card is able to save, or “write” within a certain amount of time. Your Dash Cam is continually loop recording information while simultaneously overwriting pre-existing data whenever it's in use, so the higher the sequential write speed, the faster it can process and store these write cycles without issue. A microSD card with a low write speed could cause a performance lag, a buffering “hiccup” that could induce the camera to freeze, lose critical footage, or stop recording entirely.

U3 cards are rated at a minimum write speed of 30MB/s; the U1 card is at a lower write speed threshold of 10MB/s. With this in mind, for a 322GW you should look for write speeds of up to 60MB/s or higher on 32GB cards; for the 422GW and 522GW models, you’ll want speeds up to 100MB/s on 64GB and 128GB cards; and the 622GW will need write speeds at 100MB/s up to 256GB cards, a requirement for all Nextbase Dash Cams to function at their optimum level. And don’t forget that a U3 is necessary if using your Dash Cam in conjunction with a Rear Camera Module.

But they’re more expensive, you cry. Sure, but why bother buying a Maserati only to install an engine from a ’57 Studebaker? Seriously, for a few extra bucks, you want the worry-free, high-performance U3 class microSD card for your Nextbase Dash Cam. And if you plan to upgrade your camera model down the road, it helps to future-proof the card now by purchasing the highest quality microSD you can, so that there isn’t a need to do so later for a future/subsequent model that will probably require it anyway.

Another factor to not overlook with microSD cards is storage capacity. In general, memory cards have storage sizes from 4GB to 256GB. But using a 4GB card in your Dash Cam will only capture a small number of files before being continuously overwritten due to lack of storage space. That won’t help you much with your insurance claim if the footage vanishes before you’ve had a chance to call the police. Think “bigger is better” here.

MicroSD Dash Cam cards typically range from 32GB to 128GB, with 64GB able to handle HD video (1080p), while 128GB gives you enough space to safely record in 4K resolution without quickly taxing the storage capacity. The higher the megabyte capacity, the more footage it can store, thus the 64GB U3 can record 8 hours of HD footage, while the 128GB U3 can easily manage 16 hours of HD footage. Keep in mind, these storage numbers are halved if using a Rear Camera Module. With the exception of the 122 model, which can only use the 32GB U3, all other Nextbase models can take either the 64GB or 128GB U3 formats. 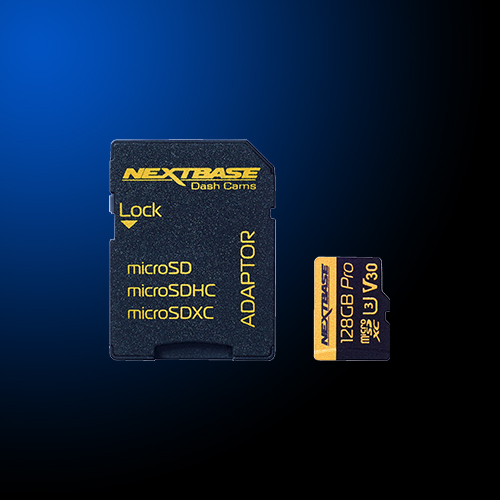 Not all SD Cards are created equal

So what makes Nextbase’s microSD cards so darn special? Well, for one, these high-endurance cards are built exclusively for their full line of products, yielding consistent recordings while avoiding functionality issues that are possible with low-capacity, non-compatible cards, such as data corruption, higher fault rates during overwriting and recording, freezing, and missing footage. A suboptimal microSD card can also potentially limit accessing some of your camera’s screens and features. Why buy a top-of-the-line Dash Cam only to restrict its full capabilities with a non-compatible memory card?

As mentioned at the beginning, most memory cards are not even built to work in Dash Cams and are generics, meant to cover a broad range of products, which ultimately makes them subpar for some applications, especially Dash Cams. And these same manufacturers are mass-producing them from disparate factories with lowered quality control and lack of standardized processes. Conversely, Nextbase cards are manufactured in a single-source production facility to ensure superior quality control and are rigorously stress tested versus competing brands. An example of this is by running the card against “wear and tear” cycle volumes: Samsung and SanDisk cards are tested at a low 200-500 write-and-erase cycles; Nextbase cards have been tested at over 3,000 write-and-erase cycles, ensuring a long-lasting, high-performance product that is guaranteed to handle everyday use for years on end.

Nextbase microSD cards are developed, from software to firmware, specifically for Dash Cams and are designed to function smoothly, without interruption, during continuous overwriting and loop recording. Other manufacturers simply cannot make this claim. In fact, Nextbase has observed that an increased rate of card failure (or “faults”) tends to happen after prolonged use with competitor products that are not meant for high-endurance usage. This is very important, since these generic cards do not meet the unique requirements for use in Dash Cams, leading retailers to void the warranty on them from the outset once installed. Likewise, both the SanDisk Ultra/Extreme SD cards and the Samsung EVO cards are not designed to be used with Dash Cams, and these manufacturers will also void the cards’ warranty if used in these devices.

How to Maintain a MicroSD

Hey, sometimes, even superheroes need a bit of maintenance. Your super-powered microSD card periodically demands it too. This is done by manually formatting your card every 3-4 weeks (2-3 weeks for heavy users, like rideshare drivers) to prevent essential footage from being erased. The microSD card regularly stores protected footage in a separate file and can’t be deleted until first converted to unprotected status during reformatting; not doing this easy cleanup activity will cause your Dash Cam to stumble when recording new footage, causing gaps, data glitches, and other critical malfunctions over time. This can easily be avoided to allow the camera to run smoothly by taking a moment to reformat.

But microSD cards have a lifespan and are not immortal. Even superheroes retire, and although your memory cards won’t be seen at conventions autographing 8x10 glossies of themselves, they will need to eventually be replaced. The reason is that memory chips are split into blocks that fail after thousands of read/write cycles. Once exhausted, the card enters a “read only” mode to protect the data, but cannot do much else. Most cards hold a lifetime write-and-erase cycle of around 10,000 cycle runs before joining that big microchip recycling plant in the sky. You can extend their lives, though, by bumping up the card storage, say from a 64GB card to a 128GB one, essentially taking double the time to fill the card. Yet another reason to go for the most space early on if you can afford to do so.

Bob Dole once said, “The internet is a great way to get on the net.” With this indisputable logic, a high-performance microSD card from Nextbase will perform highly for your Dash Cam.

And with fewer worries over maxing out your storage space or panicking over lost footage due to a cheap microSD card, you and you’re superhero microSD card can spend more time saving the world.