How to Choose the Right Dash Cam for You - Nextbase - Global

How to Choose the Right Dash Cam for You

How to Choose the Right Dash Cam for You When shopping for a dash cam, one can feel a bit like James Bond with a new gadget from Q branch. Although dash cams do not initiate a smoke screen from your car or rotating license plates, they can produce a startling level of impressive features. But selecting the best dash cam for your needs can be daunting, and some brands include many bells and whistles that are…well, just bells and whistles.

Those of us managing fleet services or employed as a rideshare driver may have a different requirement than others taking the family SUV out for a weekend trip. Still, the basic purpose of dash cams is primarily to protect one against liability and potential vandalism.

Unfortunately, not all cameras are created equal, with variances in video resolution, night vision capabilities, and field of view. And with Nextbase’s smart tech innovations and invaluable safety features, it’s easy to say that there is much more to a dash cam these days than just staring out your windshield, elevating it to a true multi-functional device with essential capabilities most folks never knew a dash cam had but are now unable to live without.

I Can See Clearly Now

For any decent dash cam, video resolution is crucial, both for daytime and nighttime video captures, with clear playback footage. Nextbase cameras provide a robust 30 frames per second with capabilities up to 120fps. And their next-generation Digital Image Stabilization feature on the 622GW model provides an even smoother capture, eliminating the stuttering effect from subpar cams when encountering bumpy roads or tracking at higher speeds. 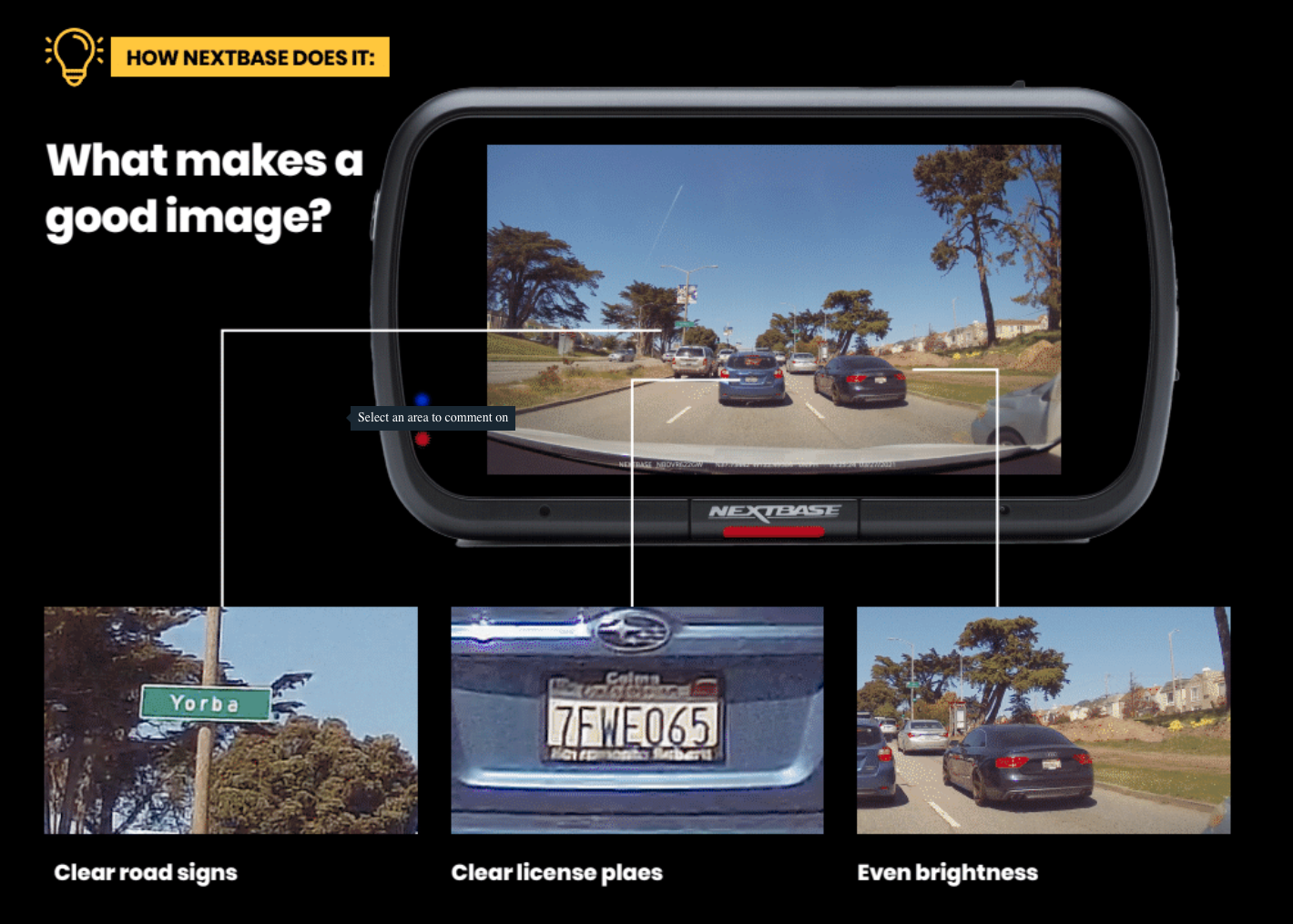 Another key element when choosing a dash cam is being able to record full hd video resolution at a minimum of 720p; anything less and you might as well document your drive with a VHS camera.

Nextbase’s Series 2 322GW and 222 cameras come equipped with a superior 1080p resolution and can produce a stunning 1440p with the 422GW and 522GW models, giving the driver sharp, clear images and definition, even in low light situations, supplying critical visual evidence, such as license plate numbers, pedestrian locations, traffic signals and street signage. 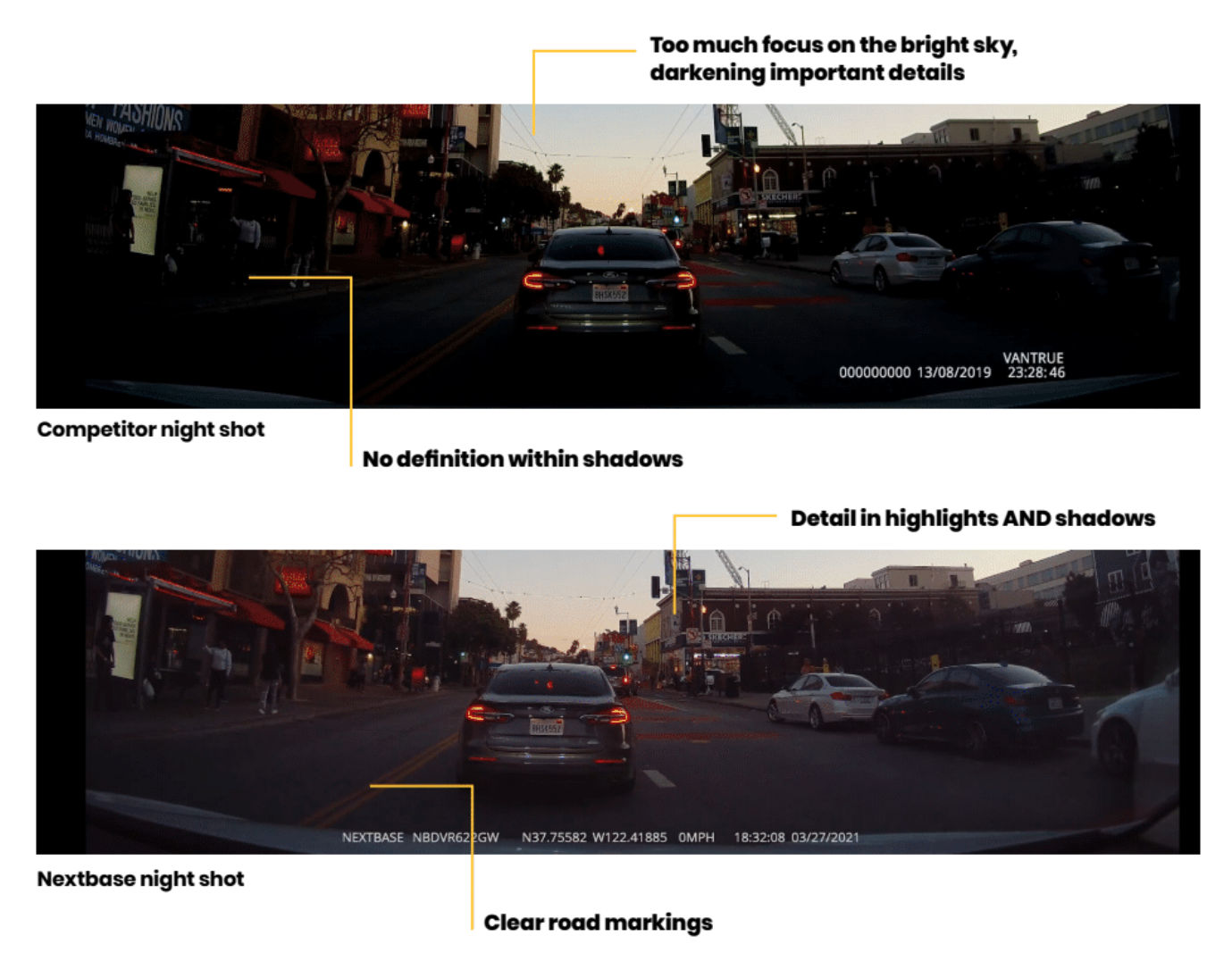 For many of us who often find ourselves on the road after dark, Nextbase offers Enhanced Night Vision in their 322GW, 422GW, 522GW, and 622GW dash cams, using the latest light sensor technology to brighten the captured image and greatly improve contrast, something many competing brands do not consider with the same concern. This is a mistake, as the risk of injury or worse is exponentially higher during nighttime driving.

Additionally, driving behaviors and visibility degrade once the sun sets, such as driver exhaustion and tendencies to speed, and depth perception is substantially reduced when it’s needed most during commute traffic in low light. It also goes without saying that car break-ins increase under the cover of night.

Having a dash cam capable of capturing an accident or a suspect in minimal light is a vital feature that should not be ignored when choosing a device. Don't take our word for it, have a look at these statistics regarding nighttime accidents.

Getting the Whole Picture

Dash cams wouldn’t amount to anything if they were unable to capture a wide field of view, but sometimes the old adage “too much of a good thing” can prove accurate. In fact, the optimal sweet spot for a wide-angle lens is 140˚, allowing for important peripheral information to be captured, such as roadside signage or sidewalks.

This spectrum aligns with the standard binocular visual field along the horizontal meridian for people and is the vision screening standard for obtaining a driver’s license in most states. When pushing this viewing angle to 160˚ or 180˚, distance distortions and blurring can often appear at the far left and right of the image, rendering it essentially useless, so beware of dash cam brands that promise extreme fisheye viewing angles without verifying the footage yourself, as this might be an indicator of cheap lenses.

Nextbase has also minimized this type of image distortion by incorporating multi-layered 6G glass lenses (some brands use inferior plastic ones), giving a consistent sharpness across the entire field of view.

Another aspect of dash cams to consider is their ability to monitor and record not only forward-facing road information but also rear and cabin views, two of which are available for Nextbase’s cameras without attaching any additional cables. A simple installation to the front-view camera is all it takes to pair with the additional module, giving you extra protection from tailgaters or visibility inside the vehicle.

But What About Those Bells and Whistles?

We knew you’d ask, but before you go out and buy a camera with the cute rabbit emoji feature, make sure you’re getting what you really need. Nextbase offers some pretty slick enhancements, many of which are exclusive, world-first features for the brand, such as Alexa, which can control your dash cam using voice commands as well as playing your favorite 80s summer jam mix. Even more impressive, the Emergency SOS will alert 911 when you’re incapacitated and in need of help, while another useful feature, the Intelligent Parking Mode, switches on whenever there's movement around your parked car, recording visual evidence should it ever be necessary. 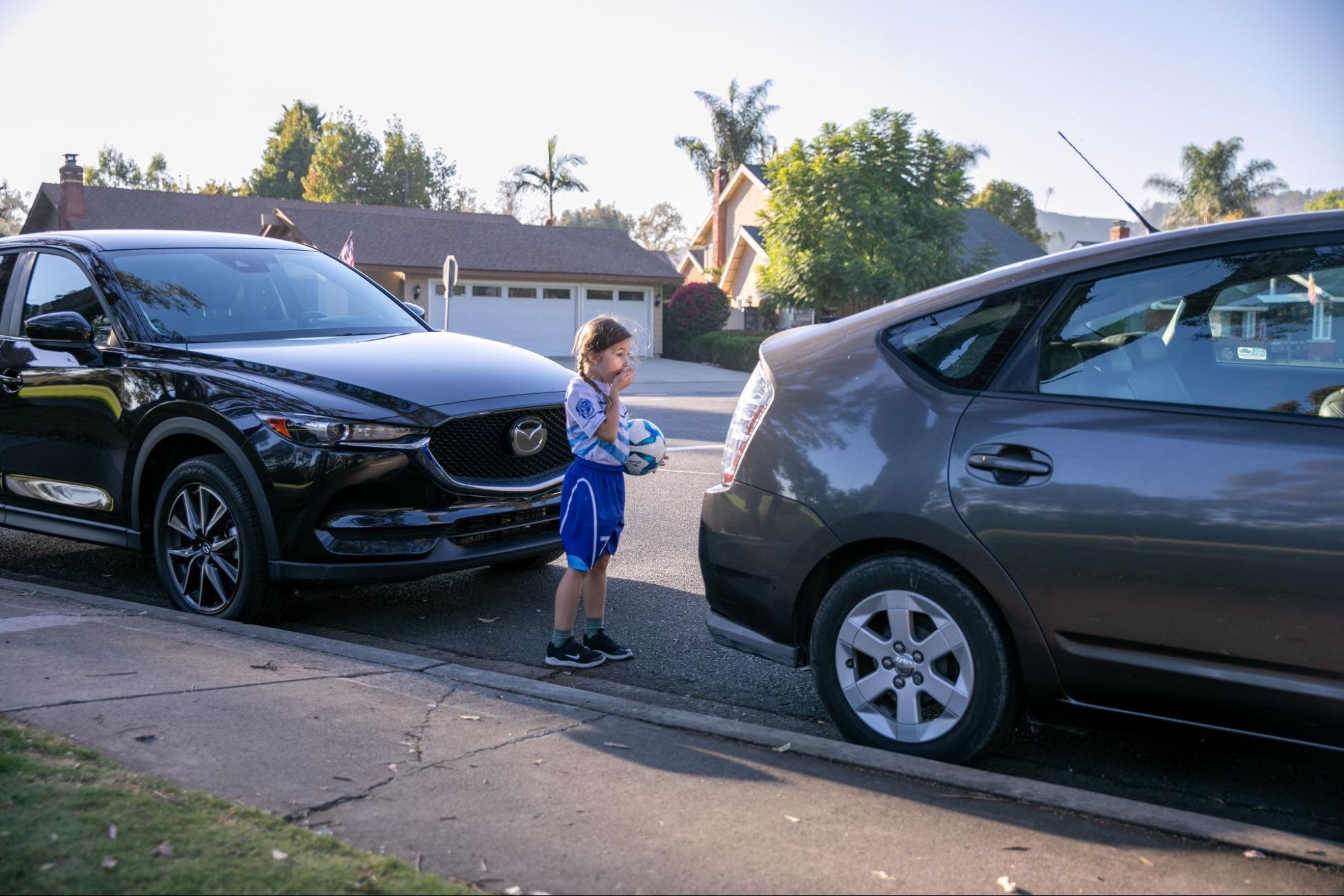 Finally, lets talk about recording capacity. You’ll want an SD card that is able to store a large amount of footage with an industrial-grade write speed. Nextbase’s standard loop recording time is a substantial four hours at 32GB @ 1080p and can be pushed up to 16 hours with a 128GB microSD card. Bear in mind, however, if using multiple camera modules, the overall recording capacity is split among them. Reformating the SD card every 2-3 weeks will restore it to optimal performance. And along with data capacity, the helpful MyNextbase desktop and Smartphone app on all Nextbase models allows one to view footage with a few clicks without having to download endless files in search of the desired clip. 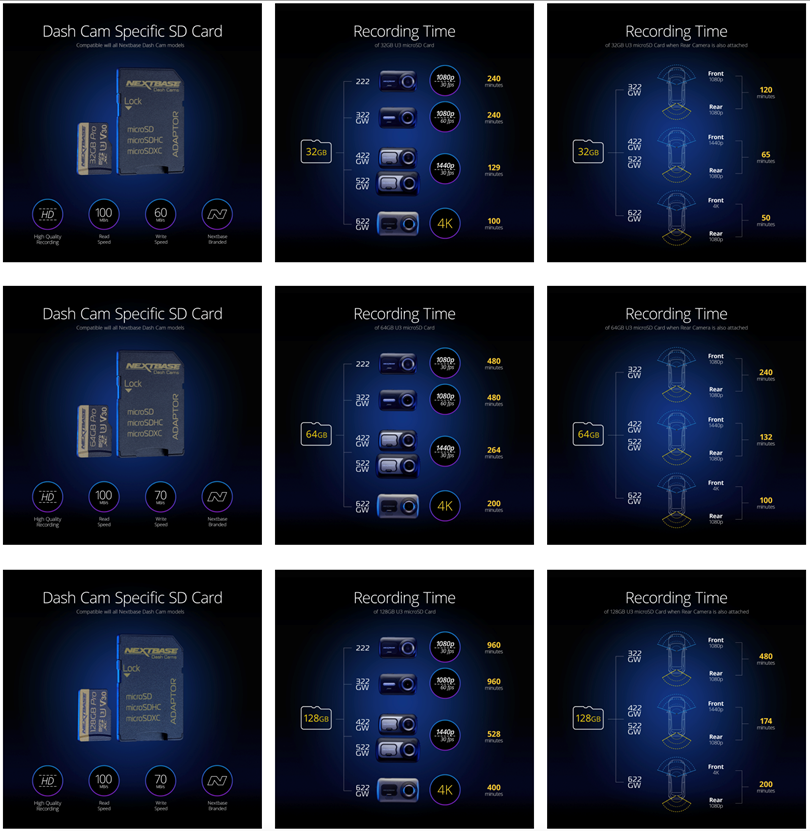 So which model is right for you? It all depends on your driving habits and lifestyle.

The mid-range 422GW and 522GW models are ideal for most drivers, including many significant features from the basic models, but adding Alexa, wi-fi, and Emergency SOS capabilities that could prove invaluable when you need them. 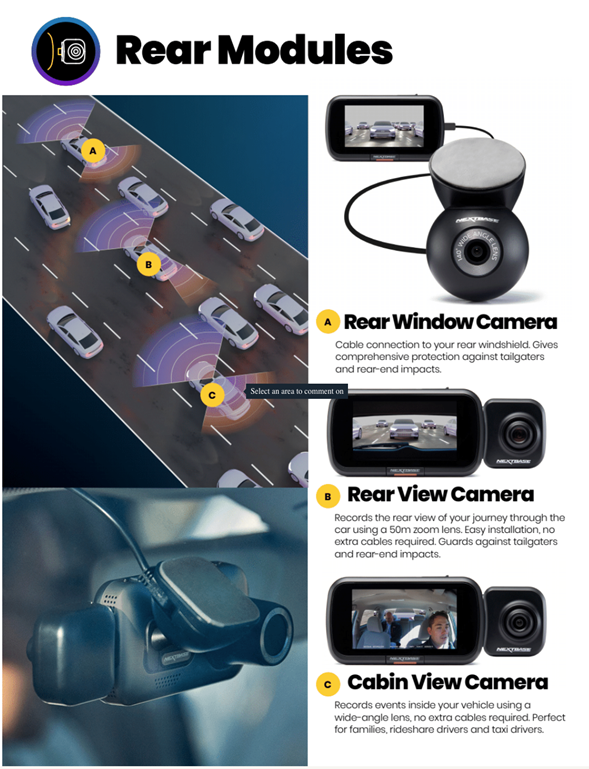 And for those with families and taxi or rideshare drivers, additional customizable rear cabin-view camera modules may fit the bill, using a wide-angle lens to capture the vehicle interior.

Another consideration is its function as a deterrent. As rideshare usage grows every year, so too have abusive behavior and even assaults, as well as fraudulent insurance claims; this cabin-view module can give the driver and the passenger peace of mind, safeguarding both while keeping a company’s reputation intact.

If journeying far from the beaten path is your thing or you live in an area with inclement weather, the latest 622GW model is a great choice, featuring extreme weather mode functionality and digital image stabilization for those off-roading excursions, along with a cool new feature called what3words that can pinpoint your exact GPS location and share it with emergency services without a data connection. Very handy if stranded in the middle of nowhere, even if you planned to be there!

On a budget? Then the 122 and 222 models, starting at a mere $59.99 retail won't break the bank and will still give you high quality images and free cloud storage to boot. You really can't go wrong with any of the Nextbase cameras, and Tech Radar just picked both the 622GW and 522GW for the top two spots as the best dash cams for 2021.

At the end of the day (or drive), any dash cam worth its memory card should provide one with a sense of safety, whether for liability insurance, vandal deterrence, or emergency assistance. Nextbase’s full line of dash cams delivers in all these areas, making your ride a lot more functional and a bit less stressful.

With apologies to cute rabbit emojis