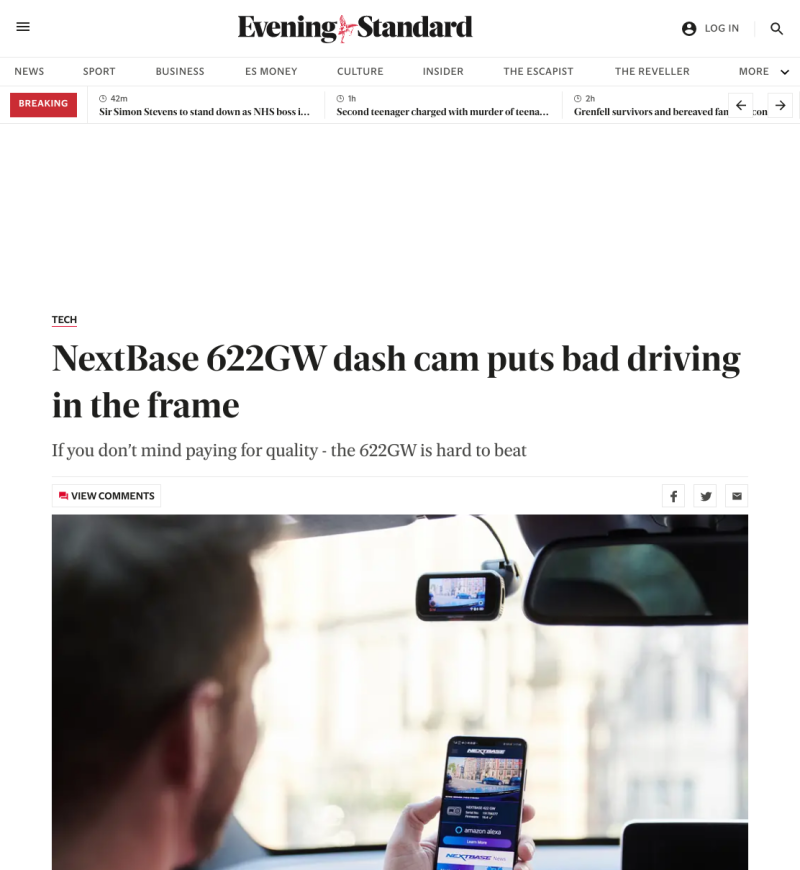 You just cannot keep the   622GW out of the headlines, with the multi-award-winning model recently featuring in The Evening Standard Online. It is included under the dedicated article ‘Nextbase 622GW dash cam puts bad driving in the frame’, receiving acclaim for its functionality and recording quality. The Evening Standard is one of the largest quality newspapers in the UK with close to 24 million unique users and has included a full feature on the 622GW which can be read in full detail here, as well as Yahoo News available  here.

The journalist looks in detail at the 4K recording by stating “the ‘film’ quality is extremely high - just as it is on the crystal-clear touchscreen on the reverse of the unit”. The 622GW features 4K cinematic recording at 30fps to capture important details and finer aspects including road signs and number plates. Further reference is made to other exclusive features, not available in any other Dash Cams, including enhanced night vision and “extreme weather mode’, which allow the unit to record effectively even in low-light and poor visibility conditions”.

The article looks further into the technology crammed into the Dash Cam mentioning that “ “The 622GW packs GPS, so that the time stamp includes a precise location; useful, again, for insurance or police inquiries.”. The 622GW features high accuracy GPS with the aid of Google Maps to provide you with accurate speed and location details, crucial in the event of an insurance claim. The journalist also alludes to the inclusion of Wi-Fi “so that you can connect to the NextBase app on your phone, giving you more control over the unit, and the ability to view footage on a larger screen”.

To conclude, the journalist comments on other ‘clever features’, such as “the addition of the what3words system, as an alternative to GPS for pinpointing your vehicle’s position, and image stabilisation, which smooths out footage on bumpy roads”.  These world’s first features have taken the Dash Cam world by storm and ensured the 622GW stays top of the class. The journalist closes by stating “If you don’t mind paying for high quality - and enjoy the benefit of clever, reassuring, built-in gizmos - the 622GW is hard to beat”.

The Nextbase 622GW can be purchased direct from the Nextbase website here using the Bundle Builder to pair with any Rear Cam Module or accessory.

Here is a link to both articles in full: